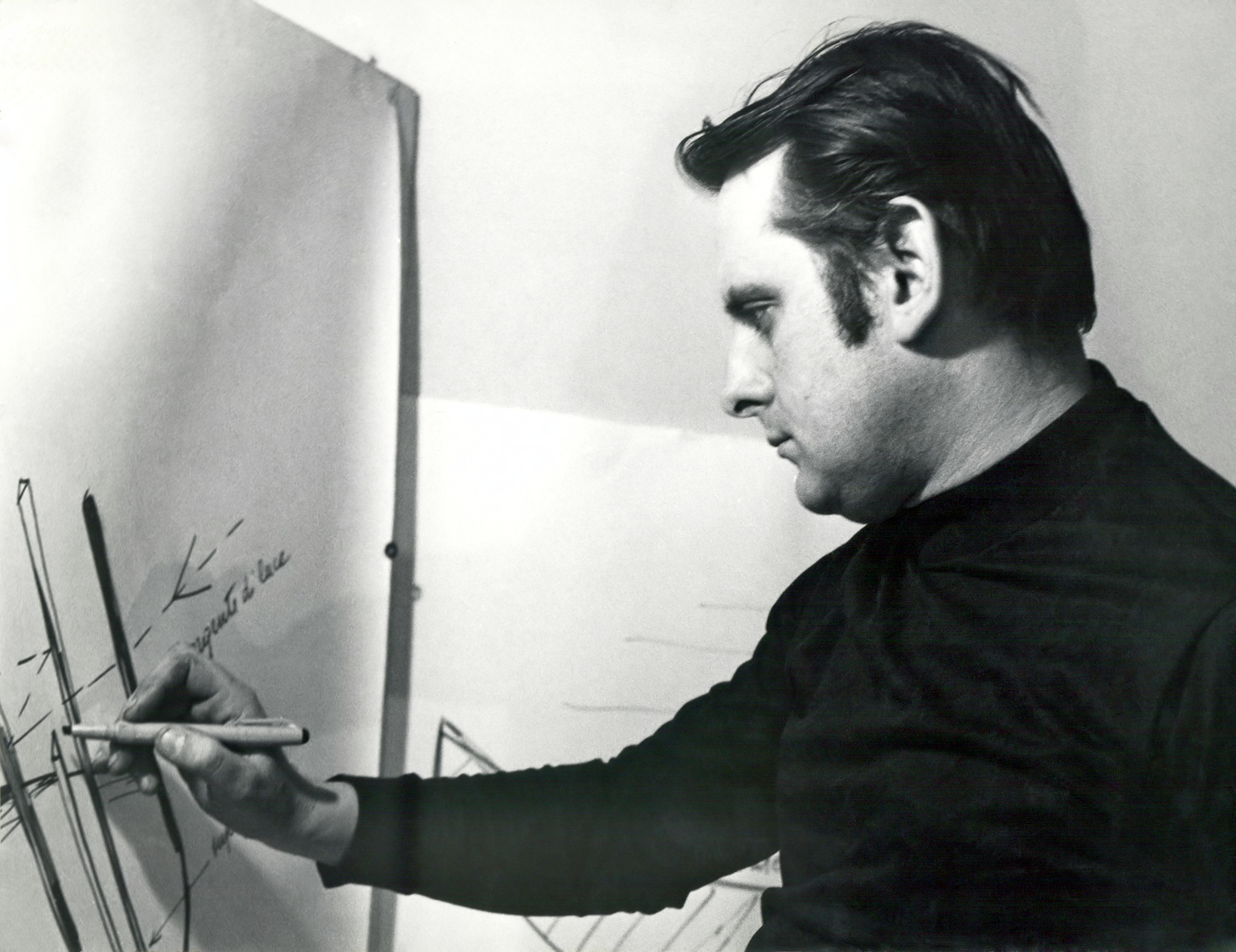 Look at the drawings
of the Fantastic City

There is something epic and extraordinarily heroic in Piero Fogliati’s creative experience given the period in which he experienced his epiphany. His work is pure artistic research, based on his observation and analysis of the phenomena that most stimulated his curiosity and creativity.

The beginnings date back to the end of the 1950s and Fogliati’s determination “to push the envelope” beyond the narrow confines of the canvas towards greater visual exploration. The city, his Fantastic City, was obviously the ideal means to achieve this.

The goal was important, ambitious, a Fantastic City full of Fogliati’s inventions, whose creation required the artist to dream freely and follow his most daring ideas.

You simply have to see a drawing (one of the historic drawings from the 1960s-70s) to grasp the utopian significance of his insights, a utopia projected on the “visionary use” of atmospheric phenomena.

A city modelled on Fogliati’s projects would be a sort of “parallel metropolis” to the cities we know, as Fogliati himself says: «the main idea was that man’s environment, the urban environment, would no longer be just an environment for survival, but a place that created a separate reality where the spectator would be a genuine participant».

So his works focus mainly on rain, wind, sunlight and the characteristic sounds of the city like traffic and industry.

From the ETEROTOPIA exhibition catalogue

What we see are not so much works of art as the inventions of a visionary who has investigated the phenomena of light and sound. In 1970 Lara-Vinca Masini was the first person to describe Fogliati as an inventor, but his real significance is as a dreamer haunted by dreams too big for just one man. This is why the Fantastic City, on which Fogliati worked for a long time, is and will continue to be a fantasy. In the 1960s, he began thinking about an “ideal city” as a vast process of sensory experiences. His complex and articulated urban project included decorating the sky by releasing coloured gas with a turbine; channelling the bustling commotion of the city into an auditorium to mix and correct external noise, generating an enharmonic and constantly changing event; building an acoustic boomerang that would travel round the circumference of city centres; condensing chimney smoke or the lapping of rivers into sound events; converting a closed environment into a musical instrument; applying to the atmosphere a phonoplastic instrument [the Anemofono] that would act on the air and the wind. He also wanted to sonorise hydrogeological eco-systems, colour rain, convert sunlight into a photostructure and wind into a wind sculpture. Fogliati did not confine himself to domesticating natural elements, he wanted to collaborate with the creative inspiration of the universe, working in harmony with Mother Nature. After all, man and the universe are the same thing, not separate entities.

Dealing with the ambiguity and complexity of the world through the pursuit of a form that responds to our desires has certainly been one of the most exciting challenges of contemporary culture. From this perspective, the city concept has been particularly closely examined, at a time when industrial realities and technological development were coming face to face with the environment, calling into question the design of the landscape as well as urban structures and housing models.

Given intense urbanisation, in the early 1960s forms of expression reflecting on the possible destiny of the city began to emerge in a number of fields; while they certainly bordered on the utopian, it was precisely for this reason that they offered a great opportunity to safeguard an absolutely fundamental “place”, the imagination. This cultural climate provided the backdrop for the Fantastic City project – and the work of Piero Fogliati in general.

Look at the works
of the Fantastic City

Light and sound are the core elements of the work of Piero Fogliati, an artist born in Canelli in 1930 who, for more than five decades, has studied the relationship between art and science.

The results of his journey are rooted in his experiences between the end of the 1950s and the early 1960s, which were fuelled by the meetings at the Centre of Cooperation for an International Artistic Research Institute (CIRA), led by Piero Simondo, and by his work at the automobile prototypes factory, where, together with his public relations activities, Fogliati had the opportunity to cultivate his innate curiosity about technology and production processes.

His need to move beyond the limits of the canvas led him, at the end of the 1950s, to abandon abstract-informal painting, where he was self-taught. He began investigating the relationships between art, science and technology, developing an idiom that led him to his “inventions”, expressions not only of his passionate interest in technology but also of a deep desire to expand into the environment in which we live and to act upon it to generate collective emotions.

This produced the initial ideas for a “fantastic city”, a project where aesthetic “moments” are introduced into the urban environment, either by transforming the distinctive elements of city life, such as traffic noise, or by acting directly on natural phenomena to create aesthetic, dream-like visions to bring people back into contact with the most intimate part of their being.

Coloured rain, achieved with special projectors invented by Fogliati, or the sonorisation of the flow of water in rivers are examples of the results he hoped to achieve.

Fogliati’s debut solo show at the Il Fiore gallery in Florence in January 1970 was accompanied by a small catalogue similar to an instruction leaflet, where the works are described with the texts for their patent applications, thus emphasising their technological rather than aesthetic content and highlighting the complexity of the artist’s research into the perceptive capabilities of the human eye and the inventions developed by him after more than ten years of experimental work in the solitude of his studio. In the catalogue, Aldo Passoni indicates the coloured light projections of Moholy Nagy as one of the precedents for Fogliati’s work and establishes a connection between the Italian artist and the research of Nicolas Schöffer, a Hungarian artist, architect and theoretician regarded as the father of cybernetic art, offering a key to an understanding of Fogliati’s career through the utopian thought common to a number of different research fields in those years.

Besides the works, Fogliati’s drawings, notably the pencil drawings from 1967 to 1970, reflect the evolution of the thinking underlying the overall idea for the fantastic city. The sudden idea that springs into the artist’s mind is sketched in free imaginary constructions, never as finished projects, accompanied by short descriptions which already reveal the desire for poetry that in later years would turn the drawings into authentic fantasy stories.

From a thesis on the work of Piero Fogliati

With his Fantastic City, Fogliati wanted to build environments or create unusual actions intended to change the customary appearance of things we accept unquestioningly.

He wanted «to change the terms of things» and, given the technological knowledge he had acquired on a number of projects, he really could have produced the extraordinary creations of his fertile imagination; this is demonstrated by the construction in his studio of the works that represent «exhibition-scale» expressions of his projects.