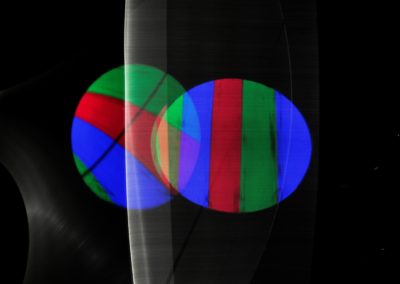 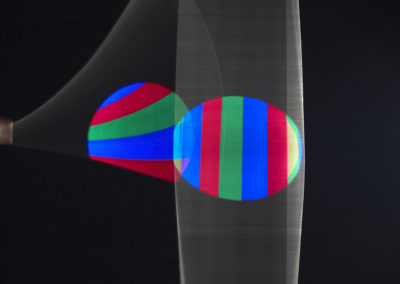 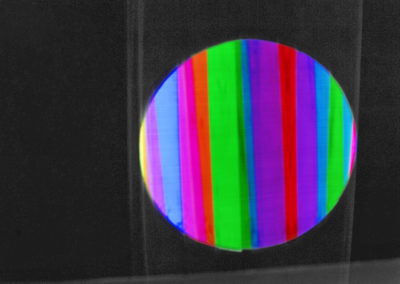 This piece consists of a Synthetic Light project that illuminates a white elastic cable. The cable is stretched vertically between the ceiling and the floor of a dark space, which is essential to create the full effect.

When the cable is motionless, the impression is that it is lit by a normal beam of light from an ordinary bulb.

But when the cable is made to oscillate, a circle of coloured vertical bands appears in mid-air. The width of the coloured bands is proportionate to the amplitude of the oscillation.

During the 1960s, Fogliati worked on the development of his urban projects. He wanted to introduce aesthetic presences into the environment and to act on atmospheric events in unusual ways. One of these was the colouring of rain.

Instead of trivialising the idea with simple beams of coloured light, Fogliati intended to create a truly unusual event with a light that “behaved in a ‘particular’ way”. In the mid-1960s, he designed and produced a type of light he called Luce Sintetica, Synthetic Light, or Luce Fantastica, Fantastic Light.

When the light is used to illuminate a motionless object, the beam appears to be white. When the light illuminates a moving object, then it breaks down into its constituent colours. In other words, the distinctive feature of this type of light is its ability to adapt to the characteristics of the object it illuminates. Fogliati realised that when a beam of Synthetic Light was projected on a moving object, the object would be coloured by the colours of the beam. This is what he wanted to do with rain, and he demonstrated the idea with the Prisma meccanico, the Rivelatore cromocinetico and the Svolazzatore cromocangiante.