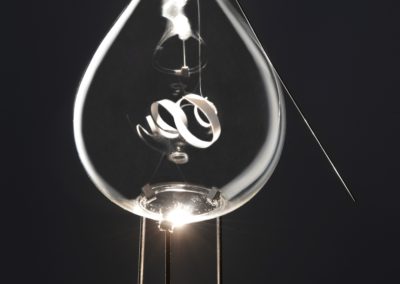 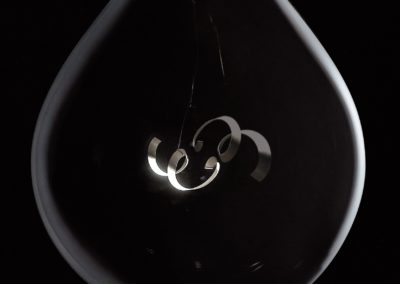 This piece consists of a hand blown fine glass flask placed above a projector created by the artist. The light is projected upwards so that the precisely regulated beam of light passes through the centre of the flask.

The projector is contained inside a box so that it is kept hidden from view; placed in a dark space and apparently illuminated by its own light, the flask resembles a vessel used by an ancient alchemist, creating a truly striking impression. An object suspended from a nylon thread is placed inside the flask, more or less at the centre, creating an immaterial image of the object itself.

The ricocheting light creates the sensation of two identical and real objects inside the flask.

But as the title of the piece suggests, one object is real, whereas the other is a virtual copy, an equivalent mirror image.